Okay, okay, okay.  I've been super bad about not posting for the past three weeks.  I actually have half a post written about dealing with fear; which I've been pretty crippled by for the past month (at least artistically).  Last night was the first public performance of Empty Boxes, which went extremely well.  I had hoped that having an audience would help relieve some of that fear, but unfortunately the theatre was super hot and I was paranoid the entire time that the audience wasn't enjoying themselves because of the heat. Wondering why they didn't laugh at this joke or that joke.  Dreading that they were super bored and annoyed that we have trapped them in this hot theatre for 90 minutes. Silly writer/producer fears.  The response was great, but for some reason I have developed the ability to completely block praise from my receptors.

Anyhoo, tonight is the official opening performance (and we've decided to let the A/C run through the show).    I'm still shaking in my boots.  So this is why I haven't been posting.  I've been pacing back and forth in my apartment waiting for tonight.  Next week, I'll be back on track with regular life.

Here are a couple of the production photos (it looks great! I'm so proud of everyone who has worked on this show):

Check out my interview for "Empty Boxes"

Recently, I was interviewed for "She Does the City" about the upcoming production of Empty Boxes. It is getting close to tech time for the show, so my lack of posts on this site has been because I'm starting to freak out about the looming opening night and unveiling of the show.  It is exciting and terrifying all at the same time.  The show is coming along beautifully, but it is a creator's job to worry.

Anyhoo, to check out the article on "She Does the City", go to the following link:
http://www.shedoesthecity.com/an-interview-with-playwright-aj-laflamme

For more information about the show, go to:
www.homesteadtheatre.ca

For tickets, go to:
http://emptyboxes.eventbrite.ca/

I hope everyone gets a chance to see the show! (And I will be back to my regular posts once it is open...)

Thanks for all your support!
Posted by Art Thief at 19:09 No comments:

Lord, give me the strength and the courage to face all my demons and trudge boldly into the unknown.  Lord, guide me to my destiny, and may my pace never falter and my steps go forward and not dawdle.  Lord, carry me in my times of need and shelter me in my times of hardship.  Grant me your love and peace throughout all I do.  Praise be your name.  In God's blessing keep us! Hallelujah!! Amen.

Written when times were darkest and despair filled my days with self-loathing (circa 2010).
Posted by Art Thief at 16:36 No comments:

Email ThisBlogThis!Share to TwitterShare to FacebookShare to Pinterest
Labels: Writing 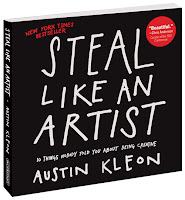 Much like Eats, Shoots & Leaves, Steal Like an Artist by Austin Kleon resonates more with each pass.  It is an easy, fun read that lays out the artistic process in such a clear and effective format.  This is my second pass through the book and I have only covered the first two chapters, but I feel like this time through, I’m taking the time to digest the ideas in a more manageable fashion.  This post is only on the first couple chapters of the book, and in a much more specific way than the first, I will discuss how this book has shaped my perspective on writing.

It begins with a wonderful quote by T.S. Eliot:
“Immature poets imitate; mature poets steal; bad poets deface what they take, and good poets make it into something better, or at least something different.  The good poet welds his theft into a whole of feeling which is unique, utterly different from that from which it was torn.”
Read more »
Posted by Art Thief at 12:15 1 comment:

This blog is dedicated to Austin Kleon, whose book
Steal Like an Artist, has been my primary inspiration.