After completing NaNoWriMo in November, I took a writing hiatus in December (for the holidays and work... mainly, work).  The start of the new year has brought a little more time, but work is still demanding most of my attention.  I have also started piano and French lessons, so practicing has eaten up much of the newly available time (though, French has been sacrificed for work recently).  Writing, on the other hand, has not.

Though I have not made huge progress, I have written every day of 2017.  I didn't make a resolution, it all started more organically.  I began writing the first few days because I had told myself that I would get back to it once the new year hit and I was no longer working two contracts, then I realized that I hadn't gone a day without writing something, even if it was not directly related to my WriMo book (which I am still about 25 000 away from completing). So now, each day, I ask myself: is this the first day we don't write?  It is proving to be a powerful motivator (as I sit in my chair writing this a mere 8 hours before I have to leave for work and about 20 mins after I got home from work).  I evaluate my day and decided whether it was strenuous enough to justify not writing.  I'm sure that day will come, but so far, this year, it has not.

NaNoWriMo went well.  I tweeted my progress throughout the month which caught the attention of CBC Metro Morning producers, who contacted my and gave me a spot on the show to talk about the experience.  It was pretty awesome and my first major interview as a writer.  I was over the moon and extremely nervous - cue imposter syndrome - but I made it through and got a lot of positvie feedback from people who were listening.  Hopefully, next time it will be for my published book.

The book is nearing completion, though I am now a firm believer that you should write your first draft in a single go; taking a break kills your momentum.  That is the reason I'm writing this post and not finishing the last pages when I'm so close to the finish line.  Oh well, it will all come.  Knowing that I have lost momentum, I have given up trying to make the story flow.  There are points left in my outline that I'm just writing out of context, then I'll "fix it in post" as they say in film.  Draft two will involve a lot of cutting and pasting (both figuratively and literally).  I often print out copies and then go to town with scissors and tape to get an new draft,; it helps me see the holes in the story and easily discard things that aren't working without hitting that dreaded "delete" key.  I keep a file of all the unused pieces just in case they make a reappearance in a later draft - they never do.

So, that's what's been up in my life.  Oh yeah, also in December, I wrote a short story which I illustrated, so it wasn't a complete hiatus.  It was quite unintentional.  I finished seeing my therapist and wrote a little story as a tribute to her, which turned out better than I imagined.  I could see it so vividly that I had to put those visuals on paper.  Here are some prelim sketches to wet your palate: 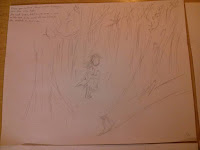 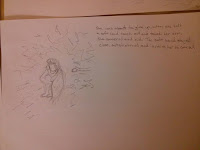 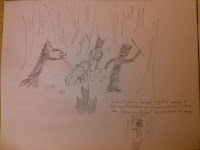 So much still to do.  Updates will follow... eventually...
Posted by Art Thief at 02:08 No comments: