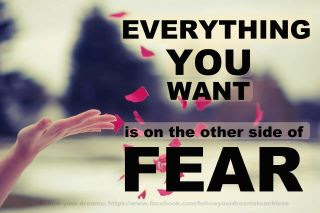 Fear has been pretty all consuming in my life lately (and I have actually been writing this post for about a month – I’ve been too scared to finish... is this irony?).  Today seems to be the day that I have just simply lost patience with fear and decided that I can either keep moving forward or give up completely.  Luckily, I’ve come pretty far just to call it quits (as tempting as it may seem).

After a few weeks of silence, I bet you are all wondering, "what happened?!" At least I used to be apologetic about not posting, but this has been radio silence. Okay, the odd post about the show, but nothing of what has been happening with my writing or inspiration. To be frank, it was because I have been overwhelmed by fear. Yup.  Fear.  My most common response when people have asked me how I'm doing is “I'm terrified”; constantly terrified. Of what? Who knows?! Life, love, failure, the future... you name it.  I have been able to ascertain that most of the fear stems from the launch of Homestead and the opening of Empty Boxes. There have been other life-things that have been sweeping through my life culminating in a perfect storm of things that send me into hibernation to the point where I refuse to leave my house each day or acknowledge the responsibilities I have (relationships, family, birthdays, unemployment, etc.).  "I don't wanna" has become my daily motto and the ostrich hiding in the sand, my mascot. Not the best way to approach life when you are standing on the cusp of many great things, but with the potential for great success comes the potential for great failure; it's just the other side of the coin. And with the potential for great failure comes a wave of soul-crushing fear. So, that's why I haven't been writing and that's what this post is about: fear.


In general, I have been fairly tight-lipped about the production of Empty Boxes to most of my friends and colleagues, until recently when my co-producers reminded me that it was my job to promote the show - terrifying! You mean people I have to work with, see every day and look in the eye are going to come see it?! Eek! Enter fear (downstage centre): what if it sucks? What if everybody laughs at you or talks about what a terrible writer you are behind your back and then gives you false smiles to your face? What if simply no one cares about your little story? What if you fail? These thoughts are paralyzing.  I have been going through the necessary motions, but barely and begrudgingly. It has been difficult. Add into that a break-up and loss of a job and I was done. Totally fear's plaything. What if I never work again? What if people come to the show and won't hire me anymore because they can't bear hide their disgust with my show? What if I never love again? Even typing this, these fears sound absurd, but looking back, fears usually do.

I am reassured when I talk to some successful writers and producers that I know. I tell them how I'm feeling and they say, "that's good. That's how you should be feeling at this point." This doesn't make things any easier but at least I know it's normal.

Fear is a tricky creature. Today, I was on the subway and a blind man and his friend were entering the train.  The friend had been leading the blind man, so he wasn’t using a cane or another navigational aid.  He was standing right in the doors with no one ahead of him and the chimes were ringing. His friend encouraged him to keep moving forward, but you could tell he was anxious and unsure about continuing.  I empathized. He wasn't using his normal tools to guide his way and had to press on into uncertainty. I feel like that constantly these days. The more possibility that enters my life, the more I cower and hide. Terror overwhelms me. How do I know I won't fall if I keep going? Alas, the truth is: I likely will fall. I will likely trip, stumble and fall no matter what I do, but it is much more intimidating when you are doing something you care so deeply about.

I can see the path to my dreams so clearly laid out in front of me, all I have to do is keep moving forward. But the tricky thing with dreams is that you picture the end result; you don’t often picture all the tiny little steps it’s going to take to get there.  Like when you go on a vacation, you dream of standing atop the Eifel Tower or sunning yourself on a Greek isle, but you don’t often spend much time imagining waiting for the cab to the airport or the line-up through security or picking up your baggage on the other side.  These are all the little steps that will take you to where you want to be and they can present roadblocks to prevent you from reaching your goal; like that time you thought you were so clever that you packed your sunscreen in your carry-on in case your baggage got lost only to have security toss it because it wasn’t under 100mL or the major pile-up on the highway which causes you to arrive at the airport exactly 5 minutes after your flight has left or even the elevators at the Eifel Tower being out of service causing line-ups to walk up the tower to be 2 hours long (not that any of these have happened to me…).  This is where fear begins to show its beautiful face (and yes, I mean beautiful face – fear is one seductive beast!)

Fear is the product of a romance with doubt.  As soon as something becomes important, doubt starts to dance in your mind and as you spend more and more time with doubt, a bond of fear begins to develop.  This is where it becomes very dangerous.  It is so easy to just give up and stop trying; to never risk anything.  But the downside is that you can’t achieve anything without risk.  So, how to you get to the other side of this relationship with fear... you just keep going forward.

Fear is the dark the hides the path to your dreams.  The path is still there in front of you, but fear makes it invisible.  Like the blind man on the subway, there is nothing blocking the way except the fear that something might be.  If you keep moving forward, you will eventually find that even in the darkness a path can be found and eventually there will be light again.  The important thing is to just keep moving forward.   It may take longer than expected and maybe you move more slowly than anticipated, but at least you are moving.

There is an old proverb (we all know how much I love my proverbs) that says that the hardest part of any journey is the first step, which I firmly believe is true, but that doesn’t mean it’s smooth sailing after that point.  It is a constant battle to keep going on.  As time passes, it gets easier, but steps 2-100 are still pretty difficult, so it takes a lot of focus to fend off the doubt demons that creep through your mind until then.  All I can say is, just keep swimming!  You’ll get there eventually.  The only way you won’t is if you stop.  Even a snail’s pace is better than standing still.

So, that’s that.  I’m back on the writing bandwagon.  Hopefully, I will be producing the second draft of My Mother’s Daughters in the next couple weeks and I have another project that I have actually been working on during this time that I will be launching shortly.  Also, posts!  Posts will be happening.  I have a bunch of things to write about that I’ve been saving up.  So, stay tuned!  Art Thief is back in action!
Posted by Art Thief at 18:19

Email ThisBlogThis!Share to TwitterShare to FacebookShare to Pinterest
Labels: Rants and Rambles